Get fresh music recommendations delivered to your inbox every Friday.

To Live and Die in West Central Scotland

by The Kimberly Steaks 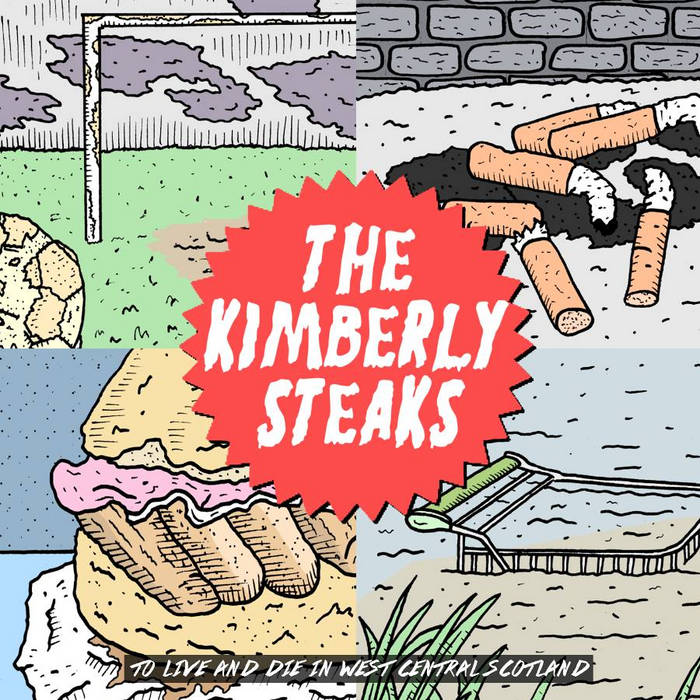 Shorty Donair Been playing this album since it's release, and it never gets old. The Kimberly Steaks are absolute masters at crafting perfect pop-punk songs. Favorite track: My quarter-life crisis.

Skuse Takes me right back to listening to Dookie as a 15 year old. I *guess* that might read as an insult, because, well, y'know, Green Day. But I mean it in a really, REALLY, good way. Utterly ace. Favorite track: Career progression.

Released in the UK by All In Vinyl Records

All songs written/ripped off by Greig Steak

Recorded in Cambuslang by Boab (punkrockrammy.com) in a couple of days in early January 2014

"This album is so stinkin' good. Like if Green Day and Dear Landlord had a baby and gave it up for adoption to Sicko who moved to Scotland with it. Or something?"
- Mitch Clem

"While the band would’ve been right at home doing singles on Mutant Pop or Rhetoric, there’s something about this LP that avoids sounding outdated and just comes across as fun as shit".
- Razorcake

"If I could have heard this album when I was 25, I would have totally bust a nut. But even now, in much happier times, I can't get enough of The Kimberly Steaks".
- Faster and Louder

"Getting out of bed is a real chore sometimes, as is getting out of the house. Everything’s a chore actually. The Kimberly Steaks definitely know this".
- Punktastic

"The Kimberly Steaks are an awesome Scottish punk band and if you haven’t heard their new album To Live and Die in West Central Scotland you’re seriously fucking up".
-Dying Scene

"This is a record that screams integrity in a time where it's so often sadly lacking".
-Glasswerk Magazine

Punk rock from Glasgow. We like to play gigs and put out records. If you want to help with either, get in touch!

Bandcamp Daily  your guide to the world of Bandcamp